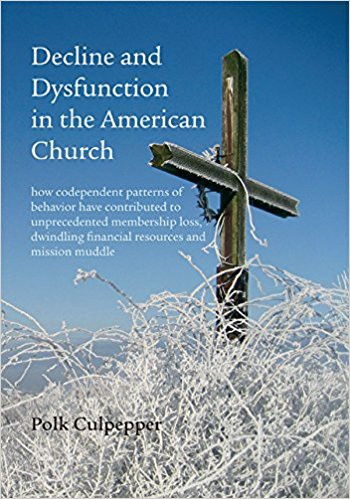 Decline and Dysfunction in the American Church

Over the last 50 years, the U.S. has witnessed the decline of the American church in membership, financial resources, respect, cultural influence and ministry. Churches and judicatories struggle to identify causes for these ominous trends. "The church most of us grew up with is dying, " says Reverend Culpepper. That should be evident to even the most ardent skeptic. The cause of that decline, however, has, for the most part, remained hidden. This book, Decline and Dysfunction in the American Church, addresses the unprecedented and devastating decrease in membership, financial resources, respect and ministry suffered by congregations and judicatories throughout the nation and offers an explanation that has not yet been considered. " Decline and Dysfunction in the American Church proposes an interdisciplinary explanation, one that converges at the intersection of Christianity and psychology. Based on his research of over 25 years of parish and diocesan ministry, Culpepper contends that the American church has, for many, become irrelevant to their lives due to the toxic influences of co-dependent patterns of behavior. The same co-dependent behaviors that devastate the efforts of human families to love and support one another effect church congregational and denominational "families" in similar ways. According to the author, this book, therefore, is meant to be read with the bible in one hand and a psychology text in the other. If decline and irrelevance are to be reversed, the church must become aware of and acknowledge the negative influences of codependent relationships in American congregations. Refusing to accept the realities of its decline and dysfunction only insure that the slide into obsolescence will continue.