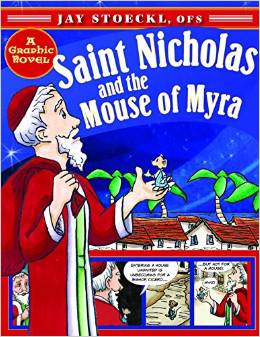 Saint Nicholas and the Mouse of Myra

This playful book illustrates—in vivid color and storytelling—the life of St. Nicholas of Myra from his beginnings as a young priest in Asia Minor in the late 3rd century until just before his death. Kids will watch as he learns and practices the generosity that led to him becoming the father of Christmas giving (“St. Nick”). As with Saint Francis and Brother Duck, Jay Stoeckl’s first foray into this genre, one fictional character is added to the mix through whom the wisdom and Christian teachings of Nicholas’s life can be revealed through dialogue: a Greek-attired philosopher-mouse by the name of Cicero. He questions many of Nicholas’s actions, often hilariously, until the mouse himself converts to Christianity late in the story. The result is an excellent introduction to the life of one of the least-understood and appreciated real characters in Christian history.