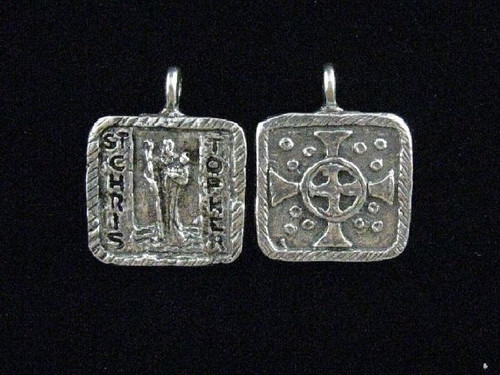 In The Company Of Saints

Saints Be With You Handmade Saints Medal - St. Christopher, Patron of Motorists and Surfers

Hank Schlau carve the original of each medal in clay. Cast by hand in lead-free pewter. Can be pendants or used on a key chain. Each comes in a pouch with a history card stating the following:

According to legend, St. Christopher was a huge, powerful man who made his living carrying people across a river. One day one of his passengers was a child who grew increasingly heavy as Christopher walked through the water. The child eventually revealed himself as Christ (the name Christopher means Christ-bearer), his great heaviness caused by his having to carry the weight of the world. Because of this legend Christopher is the patron of travelers and motorists in particular. He is the patron of surfers because, as depicted in this medal, he and his passenger move over the water. This coin was hand carved by Hank Schlau and is cast in pewter.