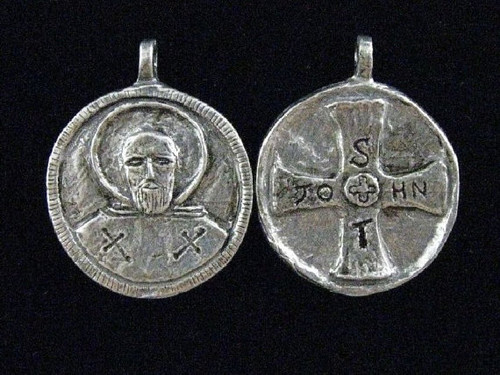 In The Company Of Saints

Saints Be With You Handmade Saints Medal - St. John of God: Patron of Nurses, Hospital Workers, Those with Heart Problems

Hank Schlau carves the original of each medal in clay. The pieces are then cast by hand in lead-free pewter. Each of these medals comes in a jewelry pouch with a card stating the following:

St. John of God (1495-1550) spent his youth as a shepherd, was a mercenary and debauchee, and then went through a brief period of insanity. In his 40s, he had a vision of the Infant Jesus, who called him John of God. To make up for the suffering he’d caused as a soldier, he rented a house in Grenada, Spain, and began to care for the sick and the poor. He gave away all that he had to the indigent and went so far as to carry, like Mother Teresa, the ill from the streets into his home, treating them with “infinite care and respect.” John founded the Order of Hospitallers. For these reasons he is the patron of the sick, especially heart patients, and hospital workers. This pendant was handcarved by Hank Schlau and was cast in pewter.