The Jefferson Bible, Smithsonian Edition: The Life and Morals of Jesus of Nazareth 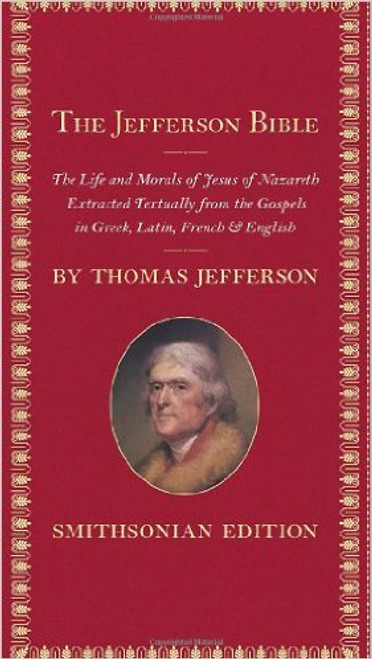 The Jefferson Bible, Smithsonian Edition: The Life and Morals of Jesus of Nazareth

The Jefferson Bible, or The Life and Morals of Jesus of Nazareth as it is formally titled, was Thomas Jefferson's effort to extract what he considered the pertinent doctrine of Jesus by removing sections of the New Testament containing supernatural aspects as well as perceived misinterpretations he believed had been added by the Four Evangelists. Using a razor, Jefferson cut and arranged selected verses from the books of Matthew, Mark, Luke, and John in chronological order, mingling excerpts from one text to those of another in order to create a single narrative. After completion of The Life and Morals, about 1820, Jefferson shared it with a number of friends, but he never allowed it to be published during his lifetime. The most complete form Jefferson produced was inherited by his grandson, Thomas Jefferson Randolph, and was published in 1895 by the National Museum in Washington.

The Bible With and Without Jesus

The Jesus Prayer: A Cry For Mercy, A Path of Renewal

The Faith of a Mockingbird Leader Guide: A Small Group Study Connecting Christ and Culture (The Pop in Culture Series)