Bible Women: All Their Words and Why They Matter, Expanded Second Edition 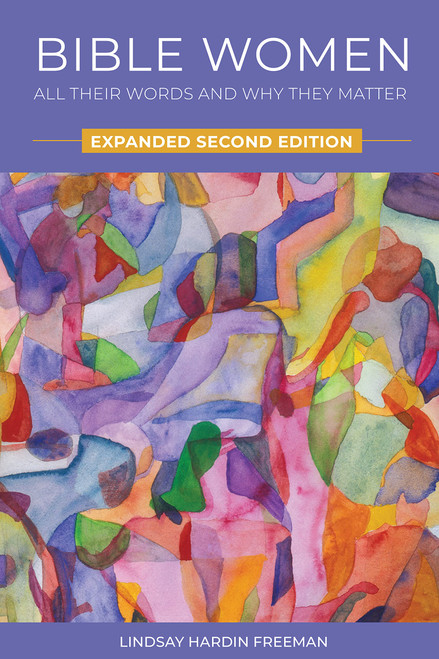 Bible Women: All Their Words and Why They Matter, Expanded Second Edition

Women of the Bible have been trapped in dry and dusty literary caskets for centuries. While a few women, such as Mary, Sarah, Elizabeth, and Mary Magdalene, are familiar, many of the women who speak in the Bible have long been ignored. Yet their words are part of God's Word, the Bible, for a reason. Through these women, God spoke, intervened, changed, illustrated, and proclaimed the story of redemption.

In this groundbreaking book named best Bible study of 2015 by Illumination Book Awards, Episcopal priest Lindsay Hardin Freeman identifies every woman who speaks in the Bible, providing their words, context, and historical background. We learn which women speak the most (hint: it's not Mary!) and which books of the Bible have the fewest words from women.

We hear the only conversation in the Bible between a mother and daughter (and it's not pretty), the words of a woman who eats her own child, and the triumphant exclamation of a woman telling the world about the risen Christ.

Step into God's sacred circle of mothers, grandmothers, warriors, prophets, prostitutes, and murderers. You won't come out the same.

The expanded second edition features new ways to use and study the words and wisdom, updated content for today's context, and 93 prayers, one for each woman who speaks in the Bible.

About the Author: Lindsay Hardin Freeman is a Minnesota-based Episcopal priest, author, and mother. She is the author and/or editor of eight books, including The Scarlet Cord: Conversation with God's Chosen Women and The Spy on Noah's Ark and Other Bible Stories from the Inside Out. A popular speaker and retreat leader, she enjoys finding humor and grace in the Bible, and sharing it fully--and often irreverently. She is married to Leonard Freeman (a poet, priest, and teacher) and has two sons and three stepchildren. Bible Women: All Their Words and Why They Matter is the culmination of four years of work with a research team to explore the words of every woman who spoke in the Bible and what they have to say for us today.

Bible Women - All Their Words and Why They Matter

Illuminating the Word: The Making of The Saint John's Bible - Second Edition

Is God Colour-Blind?: Insights from Black Theology for Christian Faith and Ministry. New Edition with an Afterword on Why Black Lives Matter

Is God Colour-Blind?: Insights from Black Theology for Christian Faith and Ministry. Revised and updated edition with a new afterword on why Black Lives Matter

The Night is Long but Light Comes in the Morning: Meditations for Racial Healing

Praying Our Days: A Guide and Companion by Griswold

Enriching Our Music 2: MoreCanticles and Settings for the Eucharist