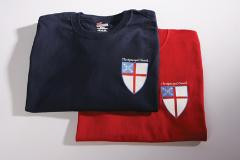 This LONG SLEEVE t-shirt is made of heavy-weight, pre-shrunk cotton with an Episcopal shield on the chest.  The back lists Robin Williams’s Top Ten Reasons for being an Episcopalian.

The Episcopal Shield T-shirt is made of 100% heavy-weight, pre-shrunk cotton. The shirt displays "The Episcopal Church" in script with the Episcopal shield on the left chest. The back features the Top Ten Reasons for Being an Episcopalian according to Robin Williams. Available in sizes Small to XXXL.

Top 10 Reasons for Being an Episcopalian (according to Robin Williams, that is):
10. No snake handling.
9. You can believe in dinosaurs.
8. Male and female, God created them; male and female we ordain them.
7. You don't have to check your brains at the door.
6. Pew aerobics.
5. Church year is color coded.
4. Free wine on Sunday.
3. All of the pageantry, none of the guilt.
2. You don't have to know how to swim to get baptized.
1. No matter what you believe, there's bound to be at least one other Episcopalian who agrees with you.