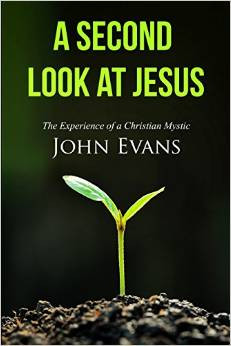 A Second Look at Jesus: The Experience of a Christian Mystic

The author, John Evans, was raised as a traditional Christian. He was fully engaged with the church from an early age with including participating in the sacraments, parochial school and service as an altar boy. During his first year of college, he learned to meditate. A few months later, he was transformed by what he calls an irresistible force that delivered him a peace that truly passes all understanding. The transformation of that spiritual breakthrough has remained with him and becomes more vivid as time passes.

Evans' spiritual journey has brought him in contact with some fascinating people. He learned to to teach meditation and journeyed to India to teach meditation there. Later, Evans worked with Robert Pritchard, a courageous Civil Rights’ activist. Pritchard was locked in a struggle to turn back a resurgent Ku Klux Klan. Pritchard befriended and counseled Evans and encouraged him to  “take a second look at Jesus.” Evans took his challenge to heart, and this book, A Second Look at Jesus: The Experience of a Christian Mystic, is a result of that second look. In this book, Evans explores how Jesus intends that we all partake in the ongoing miracle of life with an intimacy and intensity far exceeding contemporary Christian standards.

John Evans is a pilgrim of the spirit. His book, for those of us who expeienced the decades since the 1960's, is a pilgrimage searching for spiritual truth. He has found that truth in many places, landing in the embrace of The Episcopal Church. I think readers will find it stimulating and inspiring. ---The Rt. Reverend Peter Lee