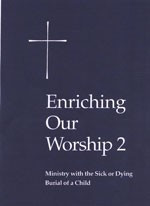 Prepared by the Standing Commission on Liturgy and Music and adopted by the 73rd General Convention, this new set of materials was adapted from sources in scripture; a variety of contemporary prayer books throughout the Anglican Communion; traditional materials from Orthodox and medieval western sources; and hymnody of various American cultures. Newly written texts and some texts from the 1979 Book of Common Prayer which have been revised are also included.

As part of its continued collaboration, Church Publishing Incorporated has partnered with the Standing Commission on Liturgy and Music to offer free worship and liturgical resources through the Office of General Convention and churchpublishing.org.