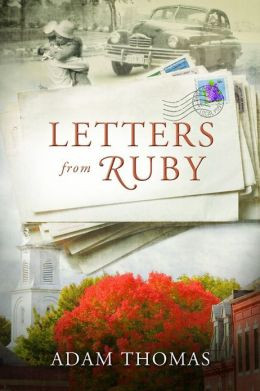 A newly ordained Episcopal priest,  Rev. Calvin Harper,  arrives in Victory, West Virginia, to be the pastor at an ailing parish. Calvin has no idea how much he still has to learn about being a priest. Thankfully, a long-time parishioner, Ruby Redding, takes the young man under her wing and teaches him everything she has learned throughout her long, storied life. Calvin didn't know that the only true way to be a witness to God’s presence in this world is to remain in relationships with people... no matter what life throws at them. His studies never taught him that detachment is the bane of ministry. He never learned that deep grief comes only from deep love. But in his first year in Victory, Calvin learns all this and more from Ruby, a woman so full of God’s light that it can’t help but spill onto the people around her.
Letters from Ruby is the second book by Adam Thomas. Rev. Thomas is the rector of Saint Mark's Episcopal Church in Mystic, Connecticut. He also writes the blog WhereTheWind.com which he began in 2008, one week before his ordination. On a local note... Adam's dad, The Rev. Dr. William "Bill" Thomas, is the Interim Rector at Christ Church in New Bern, NC.